A Barley Thanksgiving: Adding an Ancient Grain to Your Festive Feast 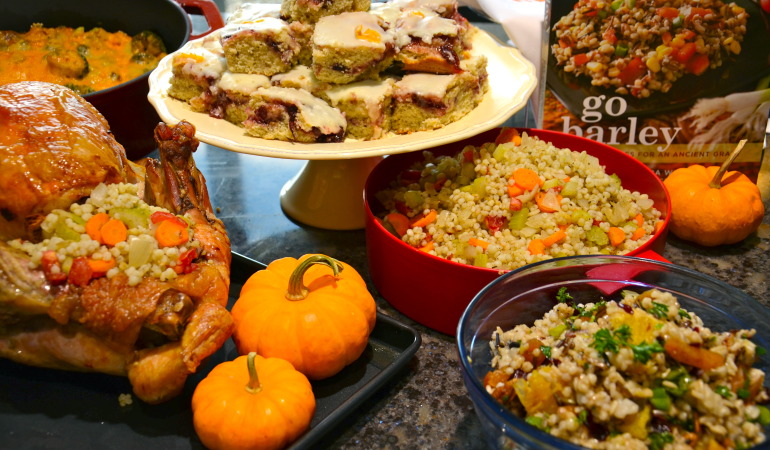 It’s the beginning of October, which means Thanksgiving is well on its way. The first Thanksgiving we all learned about in history class celebrated a bountiful harvest. Centuries later, this holiday still brings friends and family together to celebrate and enjoy a feast of traditional foods.

This year, I wanted to introduce a new, but local, festive food to my family.

As a lover of both turkey dinner and barley, cooking up a rehearsal Thanksgiving dinner was the perfect opportunity to try my hand at some recipes from the cookbook Go Barley: Modern Recipes for an Ancient Grain.

The result was a delicious addition to any Thanksgiving dinner. Below is the play-by-play of my barley Thanksgiving experience. Enjoy!

Groceries were purchased the night before and I placed the turkey in a sink of cold water overnight to thaw. By 9 a.m. the next day, the turkey was mostly thawed and almost ready for the oven.

While the turkey continued to thaw, I began prepping my ingredients for Orange-Glazed Cranberry Raisin Squares.
These squares were simple to make with only a few ingredients, including barley flour.

In total, these squares only took about 10 minutes to prepare. Once the dough was complete, I spread about half of the mixture onto a greased cookie sheet, layered the cranberry raisin mixture on top and topped it off with the remaining batter.
After baking for 30 minutes at 400° F (200° C), I opened the oven to reveal perfectly cooked squares.
Once they had cooled, I topped the squares with icing made of icing sugar and the juice and rind of an orange. 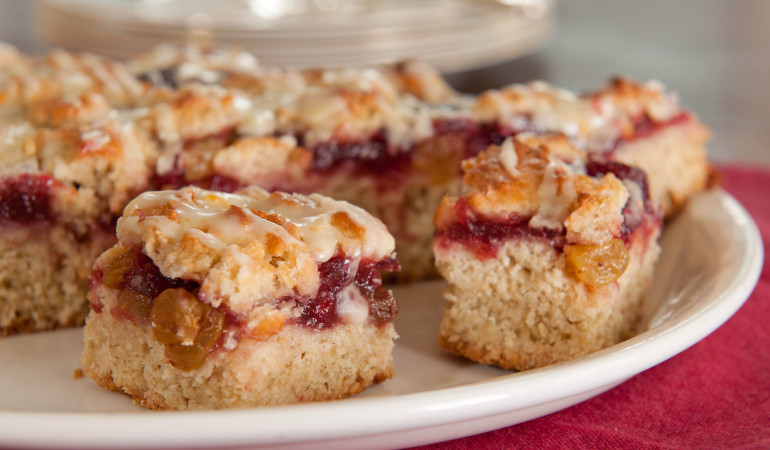 While the squares were baking, I started on the Traditional Turkey Stuffing with Barley.

This stuffing combines traditional stuffing flavours with the savoury and nutty taste of barley.

I started by cooking 2 cups (500 g) of barley in chicken broth. Barley is highly absorbent—cooking it in flavourful liquids, like chicken broth, is an easy way to add more flavour to your meal.

Unfortunately, while I was cooking the barley for the stuffing, I burned the bottom. With my amateur cooking skills it is clear that I will not be making an appearance on Iron Chef any time soon! Nevertheless, I was able to remove the charred portions to reveal relatively unscathed chicken-flavoured barley.
Tip: Remember to stir the barley while it cooks.
Following the recipe’s instructions, I chopped carrots, onions, garlic and celery, then sautéed it in a pan on medium heat until cooked.
Optional: Add 1 pound (500 g) of bite-sized bacon bits to the stuffing for extra flavour.
Once cooked, I combined the carrots, celery and onion with the cooked barley, tomato and seasonings. The stuffing was now complete and ready for, well . . . stuffing.
For the actual stuffing and prepping of the turkey, I had to bring in the big guns. Linda Whitworth, co-author of Go Barley: Modern Recipes for an Ancient Grain, helped with these next tasks. Thanks Linda!
Our 12-pound (5.5-kilogram) turkey was placed in the oven at 350° F (180° C), for four hours.
Tip: At 350° F (180° C), a turkey will cook at about 20 minutes per pound (45 minutes per kilogram). 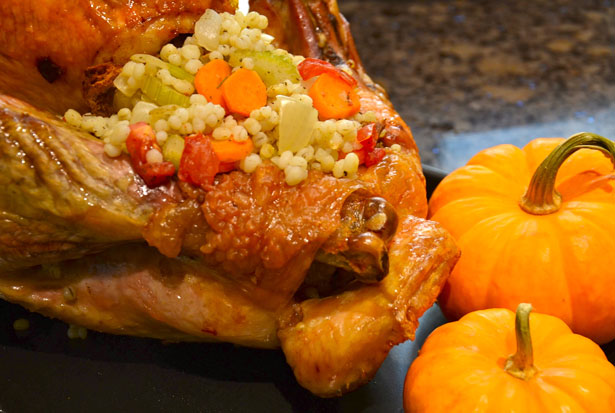 With two barley recipes and a turkey in the oven, it was time to make Wild Rice, Barley and Fruit Salad

While the barley and wild rice simmered away, I chopped and combined an orange, green onions, cranberries and parsley in a large bowl.

The cooked barley was then mixed with the other ingredients, salad dressing and toasted pecans.

Tip: Simplify Thanksgiving dinner preparations by making this salad the day before. Cooked barley can be stored in the fridge for up to three days. 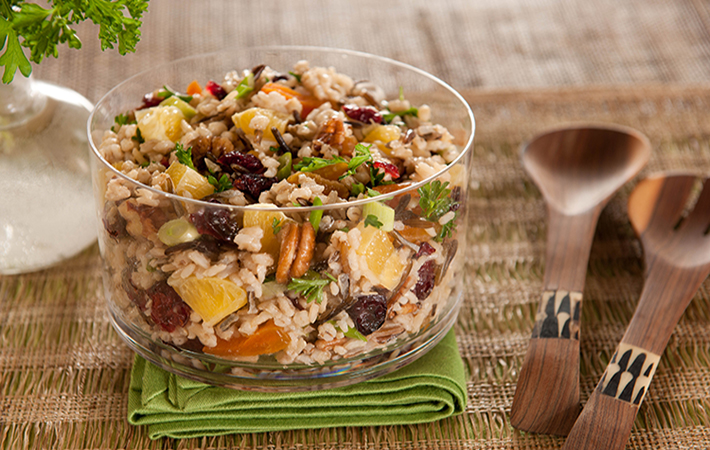 Side dish—Barley and Broccoli Casserole

In my opinion, Thanksgiving dinner is not complete without a casserole. Luckily, Go Barley offers up a delicious and super-quick Barley and Broccoli Casserole recipe.

After a couple hours of cooking, I took a break and my co-worker, Caitlan Carver, Alberta Barley’s public relations co-ordinator, took the reins. She cooked up 2 cups (400 g) of pearl barley in one pot, and simmered chopped celery and broccoli until bright green in another.

The cooked barley was topped with the celery and broccoli, coated in a can of cream of mushroom soup and topped with old cheddar cheese. The casserole was then baked in the oven at 350° F (180° C), for 35 minutes.
With the completion of the casserole, dinner was complete.

Ayinger’s Oktober Fest-Märzen is an authentic Bavarian festival lager perfect for the festive season. Parallel 49’s Schadenfreude has hints of pumpkin and seasonal spices, making it the ideal beer to go with Thanksgiving dessert.

After testing out these recipes firsthand, I can honestly say that barley is as versatile as it is tasty. Despite my novice cooking skills, I was able to add barley to Thanksgiving dinner with relative ease. The nutty flavour of the barley and its absorbent properties lent themselves well to turkey dinner, and my co-workers agreed.
This year, I will be adding barley to my Thanksgiving dinner, will you?

If you like the idea of a barley Thanksgiving as much as I do, join @GoBarleytweets and @TastyTurkey for our upcoming Twitter party! Just by participating, you could win prizes—including a Thanksgiving prize pack of a turkey carving set, a copy of Go Barley: Modern Recipes for an Ancient Grain and much more.
How do you participate? Use #BarleyTurkey on Oct. 9, starting at 8 p.m. EDT/6 p.m. MDT to discover new recipes, tips and tricks to make your Thanksgiving amazing. It’s that easy! 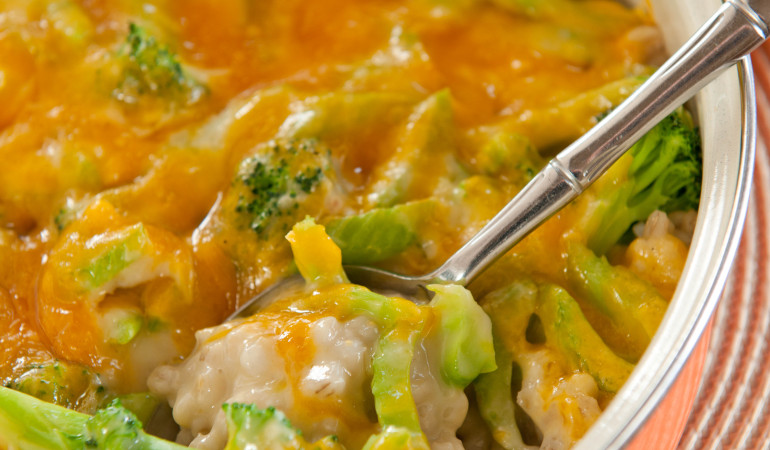