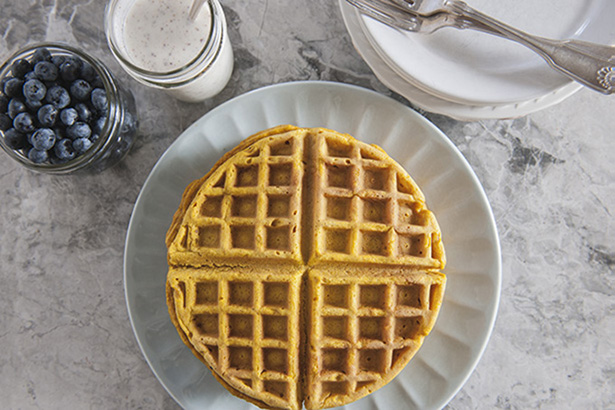 Adding cornstarch and beating the egg whites to stiff peaks helps make these waffles crisp. Instead of eating them immediately, let them rest briefly after cooking. The heat inside the waffles will finish cooking them, and you will taste the pumpkin and spice flavours at their best if the waffles aren’t piping hot.

To make Sauce:
In a small bowl, stir together yogurt, maple syrup and cinnamon. Cover and refrigerate until ready to serve.

Spoon some of the batter onto the hot waffle maker. (The amount of batter used will depend on the size and shape of waffles your waffle maker makes.) Use a heatproof spatula to spread batter over the waffle maker. Close lid and cook according to manufacturer’s instructions. Remove waffles and let rest for a couple minutes before eating. Or, place them directly on a rack in a preheated 200°F (100°C) oven until all waffles are cooked. Serve waffles with Cinnamon Yogurt Sauce.