The Barley Balance – Fibre Part Two: What is the soluble fibre beta-glucan and why is it important for heart health?

As it was discussed in Fiber Part One, barley is a rich source of both soluble and insoluble fibre. It has a large amount of the viscous, soluble fibre, beta-glucans. The daily consumption of beta-glucans has shown to decrease total and low-density lipoprotein (LDL) cholesterol, which are both risk factors for heart disease (1). Based on this scientific evidence, in July 2012, Health Canada approved the health claim identifying “The consumption of at least three grams of beta-glucan from barley grain products per day helps reduce cholesterol, which is a risk factor for heart disease.” This claim may be used in the labelling and advertising of food products meeting the qualifying criteria.

Over the past decade, researchers have found that not all beta-glucans molecules are the same. From current studies, it seems the beta-glucans in both barley and oats have the most beneficial effect on heart health (1). These beta-glucans work within the gut in two ways: they do not allow cholesterol to be absorbed into the system and then they assist the body to naturally eliminate the cholesterol.

So what does this mean in daily food consumption terms? Well, just a ½ cup (125 mL) of cooked pearled barley supplies 65 per cent of the daily amount of beta-glucans shown to lower cholesterol. Therefore, include a variety of barley foods in the diet to promote heart health. Cooking and baking with barley is a breeze. Barley’s sticky and gummy texture (referred to as its viscosity) when it is cooked is due to the high content of the heart healthy beta-glucans. It is important to note that when barley is processed into flour the beta-glucan molecules remain intact and still provide the heart healthy effect.

Barley can be incorporated into a variety of homemade dishes ranging from breakfast items, salads, soups, casseroles and baked goods. To enjoy barley in a heart healthy way, add these three recipes from the GoBarley website to your weekly meal plan: Barley Banana Bread (made with whole barley flour), Lentil, Barley and Sweet Potato Soup and a Savory Butternut Squash Barley Pilaf.

Jane Dummer’s column, The Barley Balance, appears monthly on GoBarley.com. She can be reached at http://www.janedummer.com/ 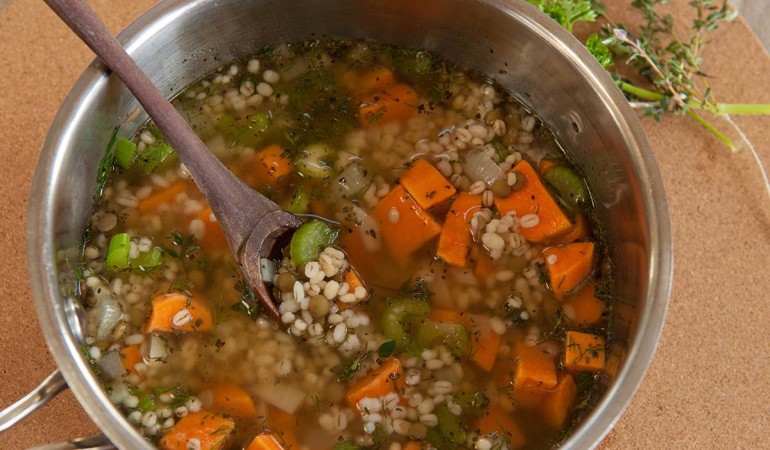