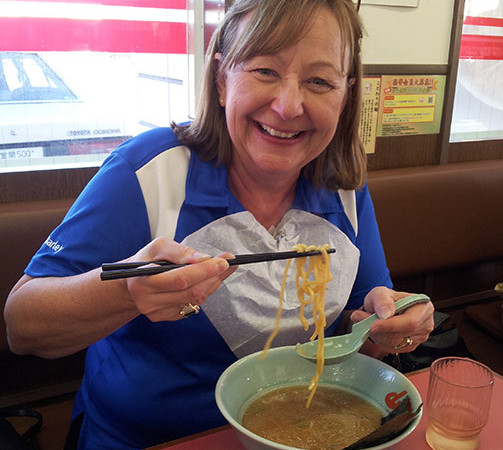 As follow-up to this visit, the Alberta Japan Office invited Trevor, his wife Carmen and myself to Japan in early October for “Alberta BBQ Heaven” a media event including more than 50 reporters and writers.

The day of the event started with a flurry of set-up activities and instructions on how long to speak in English before letting the Japanese translator do her thing. The event opened to a full contingent of media—despite a typhoon having hit the island the day before. I presented a bit of background about Alberta Barley and the inroads we have made in promoting food barley to Canadians. Japanese magazine The Orge, which offers great information on nutrition and recipes, gave me some great back up.

But the fun began with Mr. BBQ, who entertained the audience with stories of his trip to Alberta while putting together a quick barley tabbouleh from Gobarley.com. Once done, Mr. BBQ took grillmasters Trevor, Sunterra Group President Ray Price and Lee Townsend, vice-chair of Canadian Honey Council, out to the barbecues where they grilled up beef and pork. I then joined Mr. BBQ on the stage to put together a mushroom barley risotto and Berry Barley Shortcake in front of the waiting crowd. All were able to enjoy the recipes, making the event a big success.

The blog postings and articles resulting from the mission are still coming in. We had a number of questions on where to purchase pot barley in Japan—a great indicator about opening a new market for a great Alberta product.

Of course, we took advantage of the Alberta Japan Office invitation to also attend a trade show, connect with research partners in Hokaido, and further promote Alberta barley during the same visit.

All in all, an excellent way to get the word out about barley!