This Month Take the Slow Cooker Challenge with Barley 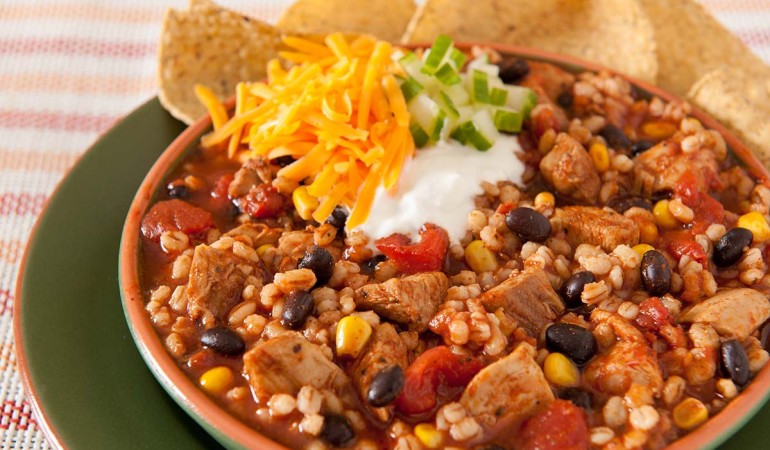 When the cool weather hits, the slow cooker can be the best piece of equipment in your kitchen. For the month of November, I challenge you to embrace that fantastic timesaving appliance and make one slow cooker meal with barley per week. So without further adieu, let’s explore a few delicious GoBarley recipes that are perfect for the slow cooker challenge.

Imagine a breakfast that cooks while you sleep! This wonderful timesaving option makes for a quick start the next morning. Combine barley and water, cover and cook for 6 hours. For extra protein, vitamins and fibre, I like to pair this slow-cooked barley breakfast with sliced strawberries, a sprinkle of pumpkin seeds and a small scoop of plain 2% Greek yogurt.

Jane’s Meal Planning Tip
Portion the extra cooked barley into single serve containers then store in the refrigerator up to three days. Each morning, just add 25 to 50 mL (a few tablespoons) of water or milk, stir, cover and microwave for one minute on high or until hot. 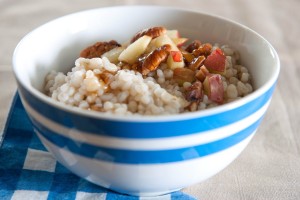 Slow-Cooker-Chicken-Barley-ChiliBarley and chicken are a pleasant change to this traditional chili. Begin by cutting the chicken into consistent bite sized pieces to ensure thorough cooking. The rest of the ingredients are easy. Just empty cans of beans, corn, diced tomatoes, and tomato sauce into the slow cooker and top with the spices. To lower the sodium in this recipe use no or low sodium canned ingredients and always rinse and drain beans and corn. 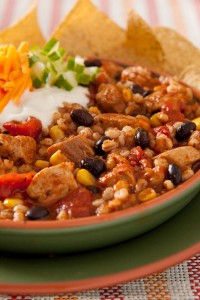 This supper simmers all day while you are at work, so when you get home a perfectly cooked, hot meal is waiting for you. The slow cooker’s extended cooking time results in tender meat even when using tougher cuts like the brisket. To lower the sodium in this recipe, always rinse the brine off of the brisket before adding it to the slow cooker. Cook on high for 7 hours, until the beef is fork tender and reaches an internal temperature of 63°C (145°F).

Jane’s Meal Planning Tip
The one bottle 341 mL (12 oz) of beer in this recipe adds a rich, malty flavour that pairs well with the beef and barley. If you don’t want to cook with beer, use a mixture of half water and half low sodium beef broth instead.

Barley Bottom Line
Barley is a tasty addition to your slow cooker meals because it holds its consistency and absorbs the mingling flavours as it cooks. For the last week of the slow cooker challenge, I encourage you add barley to your favourite recipe or create a new one such as a slow cooked hearty soup with barley or a fall inspired risotto.

Have a favourite barley slow cooker recipe? Share it with us! 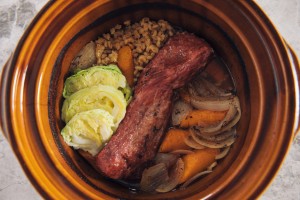