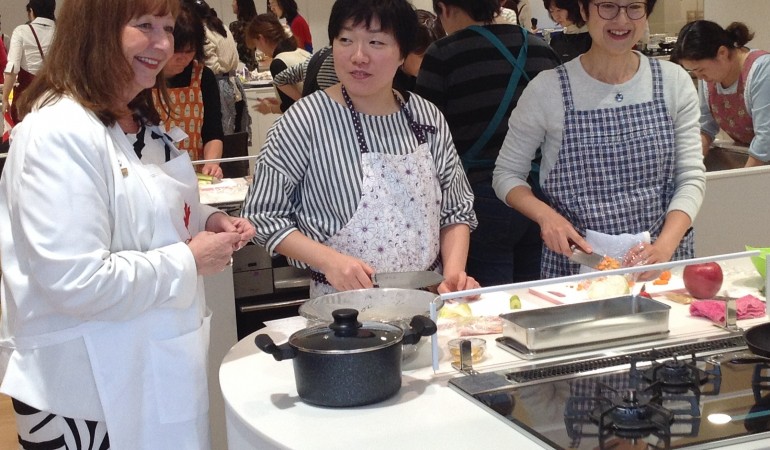 On a recent trip to Japan with the Barley Council of Canada (BCC) to promote food barley, we had the opportunity to meet with the chefs from the Osaka Gas Cooking School. I had been invited to talk about barley in everyday food preparation and to encourage the use of it as a tasty, healthy alternative to rice. Japanese consumers, much like Canadians, are looking for healthier options and with barley’s known cholesterol lowering effects it is a great food choice.

Many of the chefs we spoke with had never cooked with barley so this was a great opportunity to influence them about the benefits of barley and, in turn, pass on their knowledge to local consumers. One of the great things from this trip, and the previous Japanese trade missions, is that one of their largest manufacturers of barley products has begun to use Canadian barley in their domestic products.

It was a busy trip meeting with the chefs from the cooking school one day, and with grocery buyers and restaurant chefs from the region on another. Following the meetings, our hosts presented us with a gift of Japanese spices, “to sprinkle on top of any food product, especially rice or barley.”

To honour this kind gesture I made an adapted Japanese fried rice using barley. It was absolutely delicious. If you don’t have the special Japanese spice on-hand a pinch of a powdered chili would give a similar flavour.

Japanese Inspired Fried BarleyIn a small saucepan combine barley and broth. Bring to boil over medium high heat, and then reduce to simmer and let cook for 35 minutes until all broth is absorbed. Set aside.

In a large skillet over medium high heat pour half the oil. Beat the eggs and pour into the skillet quickly cooking and stirring to form large curds. Remove eggs to a bowl and set aside. Add the remaining oil to the skillet and quickly brown the chicken. Add the shallot, carrot and peas. Stir for 2 minutes until shallot is transparent. Add the cooked barley and stir until combined. Stir in soy sauce, and then gently stir in the eggs.

Serve with a pinch of the spices sprinkled over top.